skip to main | skip to sidebar

A Hard Rain - lots of it. Turbo training with Bob Dylan. 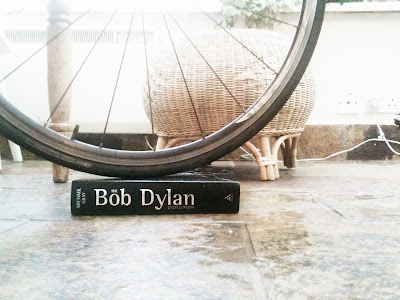 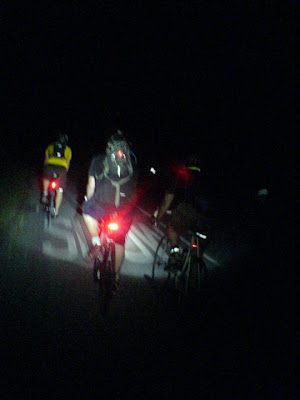 For me this was probably the best thing I have ever done on a bike. I know I say this quite often. But this time I think it will take something quite special to beat the DD (Etap De Tour next year maybe...).

I had spent the previous 3 days in Saxmundham and then Darsham in the caravan with Libby and the kids. Where I’d been drinking a lot each day and eating BBQ’s. I’d been checking out Twitter for DD updates and everyone else was eating pasta, getting sports massages and going to bed early. I did not do this but I am cool and harder than most. I got the train back to Chelmsford from Saxmundham in the afternoon on Saturday after breaking the caravan down and setting it back up again in Darsham (this is major task, which I did twice) – I was proper knackered but too excited to sleep on the train.

I popped in to see Paul who made me a gorgeous pasta lunch with cheddar cheese.. Went back to mine, packed my stuff and thence to the station for 1800 to meet Simon, Paul and James.

At Liverpool Street we met Craig. Craig was initially Paul’s friend from Epping. But he is now my friend too. Craig is good at riding bikes. He is the Singlespeed Champion of Beastway 2010 (for real).

Got to the Pub in the Park in Hackney; this was wicked. Loads of people on bikes. Lots of lyrca and team jerseys. But also plenty of 'Chimney Sweeps' and a healthy smattering of ‘average people’ on a selection of mtbs with slicks, commute bikes and hybrids. There were a few tattooed ladies, lesbians, show offs and people on tandems with dogs in baskets on bamboo bikes with moustaches. Simon on his 15 year old Raleigh racer suddenly became much cooler than us on our relatively posh modern road bikes. Paul and I had half a pint. James made some minor adjustments to my bike. We took some photos. And at 2000 we were off.

Riding out of London was initially great. Being a big group (1400 of us) meant everyone sort of stopped and got out of our way. However as we made our way from the centre towards Epping there was an air of lariness from the locals. All of whom appeared to be drunk.

Paul and Craig ignored the pre-described protocol and rode ahead all the time steadily overtaking anyone in front of them. We rode thru Epping. I was instantly starving. We stopped at a garage; I had a Gingsters sausage roll. And before I knew it we were crossing the A414 going north and passing signs for Chelmsford. We rode well. We slowly picked off everyone in front of us. Occasionally someone would overtake us; Paul would try to contain himself but within 60 seconds we’d be off chasing whoever it was. Paul and Craig took the lead on most of this section, we rode in their slipstream. It was a beautiful evening - warm, the wind behind us, light until about 2200. Occasionally we’d ride with other groups or pairs of riders. We passed loads. I had no real idea where we were going. Simon being ‘king o the gypsies’ knew where we were going and Paul had his map thing (we all had map things, but Pauls used his, I think). But really all we did was follow the lights of riders in front of us. It was quite something to see this trail of red blinking lights in front and over your shoulder see a trail of white lights behind you. As it got darker the riding felt more sketchy. I think we all remarked that the overriding concern would be if one of us where to come off. Crossing little country roads to take a left or right was tricky cos of the loose gravel stuff in the middle of the roads. I saw Craig slide a tad a couple of time. Riding in the dark on the road is good though. You can’t see the hills. You have to trust the bike and kinda look ahead like you do in the woods. We swooshed and whooshed. It felt easy. I felt strong (being pulled along).

We stopped at the ‘halfway’ feed station; a village hall somewhere outside Sudbury, I think. Had some rubbish tea and big floppy roll each. We were all pretty wired at this point. We’d done appx 55 miles. It was midnight. Paul’s head started to become luminous. Simon broke a spoke. And we were off.

This was probably my least favourite bit. The roads we were riding were bigger and there were a couple of cars. We passed what may have been an accident – ambulance etc. The descent into Sudbury was pretty terrifying. For all non road riders, who think road riding is somehow boring or not as exciting as mtb, you are incorrect. It was a big downhill hill.. straight in to the centre of town and in to a oneway system that seemed to go on forever. The lights were green as flew into Sudbury but I kept thinking about someone jumping the lights straight in to one of us. Round and round we went. And then finally we back on some on to an A road with some traffic. We passed pubs with lock- ins. Pissed people, Chinese takeaways, kids who should have been in bed tried to shout clever stuff at us. Groups of riders everywhere. Flashing red lights of someone in front of you. I was tired, sort of. I started looking at my Garmin calculating how much longer we had. Our average speed was good. We then hit some big hills. James shot off to annoy Paul. Paul gave chase and Craig, Simon and I didn’t see them for 30 minutes.

It was now proper dark. I had my Hope helmet light on. We passed more and more people who had stopped to fix bikes, eat food, rest and occasionally sleep. We still rode harder than most. We slowly picked our way forward. The notion that we stick to a sensible speed was ignored. Paul started getting grumpy. James was being sensible but then got cross at something I have forgotten about. Craig was going slow for his usual pace. Simon, who had been struggling a bit to keep up in the first half came in to his own and started going at the front a bit. I started flagging. I lost them for 20 mins at one point on this fucking hill. But James held back and waited for me. We still had ages to go. We decided to stop at 90 miles. We stopped at 85ish in the middle of the road; empty fields stretched out on all sides - silence. I ached everywhere. My neck was stiff. My shoulders ached from lifting my stinking helmet with the light on. It was about 0200. We ate some more food. Took some photos. Took the piss out of each other. Simon did some stretches from the war. Some small lunges like what they did in Dads Army. This was incredibly funny for some reason. It was wicked; Middle of the night. Miles to go. Everything hurt. I couldn’t really stand up. We were running out of water. We enjoyed the countryside. James did another one of his bizarre toilet manoeuvres. Great fun.

After our 10 min stop we rode for appx 4 mins and came across a house in the middle of knowhere selling bacon rolls and tea... We didn’t stop. Who’s idea was it to stop where we did ? Anyway we got that bit wrong. We need to remember that for next year.

I started seeing signs for places I recognised – Sibton, Heddingfield, Saxmuhndham. These old Anglo Saxon names illuminated by our lights on the road signs kept pulsing through my head like a strobe long after we left them. I was now really looking forward to it ending. We had appx 30 miles left. But I felt like I knew the roads we were riding. I have spend a lot of time in this part of Suffolk. It was still dark. But we knew the light was coming and the end was nearly in sight. Riders passed us. We passed others. On most of the route intersections we passed small clusters of riders eating and staring. They’d point us in the direct we already going and we’d say thank you. Cos we are nice.

We rode with these two blokes for a bit. One had a fixie and another a Cannondale Bad Boy (a mtb hybrid for street riding - small wheels). We would usually fly past riders like these two but they kept coming back. They were good. Much quicker than me going up. And I was only faster on the flat cos my bike was better suited.

And then I could see the A 12. This was probably my favourite part of the ride. I had another gel to celebrate. We only had appx 9 miles to go. We crossed the A12 and in to Darsham. I could literally see the caravan with Libby and the kids asleep and Scott and Nicky in the tent next door. I knew these roads. It was all downhill from here. We picked up speed. I was very excited. The sky was becoming deep blue and then minute by minute light blue. We started really moving (or maybe it was just me). Other riders joined us. It felt kinetic. Everyone was getting power from everyone else. As we passed another rider or a rider overtook us, we got pulled. We were riding to the sea. The final straight into Dunwich was cool.

At 0450 we arrived on the beach. We shook hands. I was somewhat relieved. We very formally put our bikes to one side and joined the queue for breakfast. We just stared a lot, for a bit. Then took the piss out of Paul and me. Got our breakfast. James actually got wound up about not getting his extra toast. He was rather indignant. Simon had a can of cider. I stole a bottle of juice. We got to the beach. And sat on it. Paul went to sleep. I had a massive cramp attack.

We were among the first 200 riders to the beach. There were 1400 riders in all, I am told. We did well. My Garmin is not connecting to my pc. But James has some stats. Our average speed was just under 17mph – pretty good.

Simon went back to his caravan encampment. And James, Paul, Craid and I had a painful ride back to Darsham to my caravan. I bid goodbye to the others and they carried on to Halesworth Railway Station where they boarded a train back to Chelmsford. But got kicked off at Saxmundham and had to ride 30 miles to Ipswich to catch an Inter City.

Riding mountain bikes in the snow at Danbury 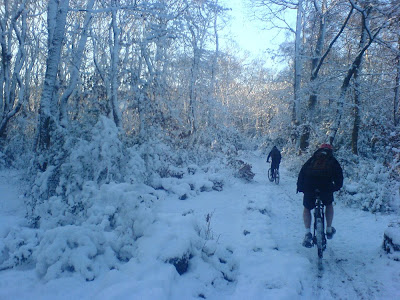 I have found a great blog; it's called AOR Disco and they have loads of stuff that is right up one of my many (musical) streets.. Go here - http://aordisco.blogspot.com/

I am especially taken with this incongruous and sublime mix by Steve Lee. Listen to it here - 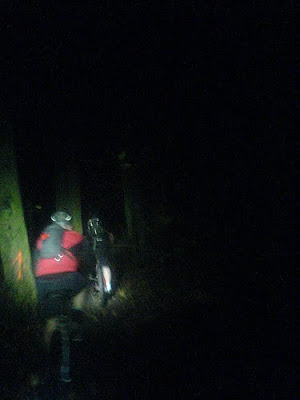 Dan Auerbach - Keep It Hid. Is probably the best record of the year.

Fred
I live in a house, United Kingdom
Funny

The title of this page comes from the Gene Clark album, 'No Other'. Perhaps the greatest record ever made.


Music is posted for sampling purposes only.

If you wrote, played or sampled the music yourself and object to me telling everyone how great it is, please let me know and I will take it down immediately.